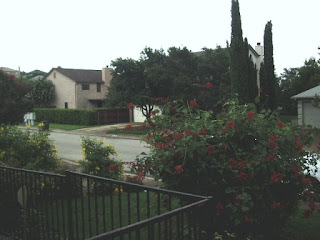 Well, it’s been a pretty wet spring. My little Garden of Eden had turned into the jungle of Borneo. Yep… vegetation was taking over my outdoor living space. If I let it go much longer, I won’t be able to get out the back door and that will just tick off the feathered freeloaders who depend on feeders full of sunflower seeds. Can’t have that.

It was particularly beautiful out this morning… a balmy 70-degrees with clear skies and the sun just breaking the eastern horizon. Yep, it was perfect. Time to do some trimming. I fetched my pruners and started cutting a path to my front yard. I was starting there, because it’s the first to get the sun. If I waited until nine, it would cook me, and I wasn’t up for that.

I had just finished cutting the esperanza where it was overhanging the driveway, threatening to choke access to the garage, and had moved on to the rose bushes that are starting to look more like rose trees when I heard Bob hail me from the sidewalk.

“Trimming your bushes?” he called cheerily.

I kept on clipping, hoping Bob would keep on walking. Yeah, I know, fat chance, right?

“So what ya been doing for the past month?”

Now he was right beside me and I hadn’t invited him, but then Bob doesn’t need an invitation. Bob’s like an annoying gnat. No matter what you do, he keeps showing up. I sometimes wish they made people repellant. That probably wouldn’t work either. He’s developed resistance.

When I didn’t answer right away (I was trying to think of a smartass response that I hadn’t used before), he persisted.

“I saw ya had a new car parked in front of your house for the last week. Did ya have company?”

“No, Bob, I decided to rent out the parking spot.”

“Seriously? You can do that?”

“Yeah, Bob, and I rent the air rights over my house to the Army… that’s why those helicopters keep flying over it.”

“No sh*t?!” Bob exclaimed with a shocked look on his face. “How much do they pay? Maybe I could get in on that.”

I thought about giving him the phone number to the Joint Base San Antonio (it used to be called Brooks Army Medical Center or BAMC – pronounced BAM- see) contracting office, but then I figured Bob would actually call them and I’d get a visit from the Army Inspector General’s office, so I didn’t. I just looked askance at him.

“Geez, Bob, after all these years I’d have thought you’d learn.”

“I s’pose you didn’t rent out yer parking space either?”

“Not that it’s any of your business, Bob, but my youngest son was home for a visit. After two years on the road, he took a break from driving big rigs.”

“But the car was only here for a week,” a little light bulb went on in Bob’s brain. “Oh! He must just have bought it!”

I’m sure Bob would have demanded more details, but I was done pruning my growth industry. Besides, the organic material recycling bin was full and the city is picking up today.

“Well, Bob, I can’t fit any more in my bin, so it’s time to trundle it out to the curb and wait for my check from the city.”

“They PAY you for trimmings??”

I just left him there, goggle-eyed. He has the number and I figure our civil servants could use a laugh.
Posted by S. Bradley Stoner at 6:35 AM