The Square Peg – Cause and Effect


The Square Peg – Cause and Effect
© S. Bradley Stoner 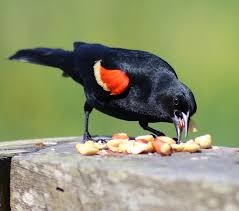 Yesterday I left you with a promise to follow-up on the Round Robin tale. So here goes. As I said, the neighborhood birds are eating well… so well that they are getting fat. Anybody who says that animals only eat what they need is full of it. And you know what it is. Birds, for example, are little pigs. Sometimes aggressive little pigs.

We have a Red Winged Blackbird that will commandeer an entire feeder, chasing off all comers, including White-winged Doves that are more than twice his size. He doesn’t care. He’s a bully. Nobody is allowed near that feeder until he’s stuffed. Curiously, he even chased off a Golden Shafted Flicker, and that woodpecker is easily twice his size with a beak strong enough to hammer holes in an oak tree. Believe me, that’s no easy task. Turns out, however, Mr. Flicker is a scaredy-cat.

The only one that gets away with sharing the feeder is one of the smallest birds we have… an Eastern Black-capped Chickadee. I’m guessing it’s because he’s so small, he can sneak in on the opposite side of the feeder without attracting the Red-wing’s attention. He’ll grab a seed and be gone before the blackbird knows he’s even there.

The blackbird has a fraidy-cat side too, though. Let a human step into the yard and he’s gone faster than you can say, “lollapalooza.” You might say people are his Achilles’ heel. Or maybe he just doesn’t like us. Who knows? But I digress.

Anyway, on to cause and effect number one. Normally, the neighborhood birds breed and raise a brood twice a year. Once in first spring (that’s the normal one) and once in second spring (that would be in late September. We do get winter in South-central Texas, but it only lasts a couple of days. The rest is spring and summer. They tell me we have fall here, but I’ll be damned if I’ve ever seen it. Back to the birds. This year, with all the folks providing them with an abundance of good eats, the horny little buggers have had two broods so far, and they seem to be working on a third. This causes a population explosion, which, of course, increases bird seed sales at the local Walmart.

If the birds weren’t so much fun to watch, I could save a fortune. Okay, maybe not a fortune, but at least enough to go buy that nice 10” compound miter saw Harbor Freight keeps enticing me with lower and lower prices. I don’t know where I’d put it… the shop is pretty darn full right now, but it would simplify a lot of little jobs. I digress again… dammit. Maybe I have ADD… Ooooh! Squirrel!

Hey… don’t tell me I’m the only one! I’ve seen what some of you out there post. Speaking of squirrels, we are now attracting those… about four of them. I’m pretty sure they’ve taken out ads in the squirrel network. Not only that, they’re losing their fear of me. Now they just climb up on the fence or the pergola and stare at me when I try to scare them off. On the other hand, they might just be too full to move.

This brings me to the second cause and effect. I was sitting on the back porch enjoying a relatively cool afternoon (I say relatively because the temperature was hovering around 90° F rather than the 100+° mark where it had been for the past week). The birds were ignoring me as usual, happily nibbling away at the column of sunflower seeds in the feeders. Dumb Dora (a White-winged dove so named because her porch light burns only at about ten watts) waddled up to get a drink. When I say waddled, I’m not joking or being disparaging (well, maybe just a little). Dora is so fat her belly almost drags on the ground.

Anyway, she hops up on the small fountain to my left and proceeds to leisurely drink her fill while I sit and watch. She’s just about to head back to the feeder when there is a sudden flash of gray, the air next to the fountain is filled with a puff of downy feathers, and Dora is GONE! I mean gone gone. Yep, number two… cause: fat doves; effect: hungry hawks; result: dinner for one. Hey, hawks have to eat too. 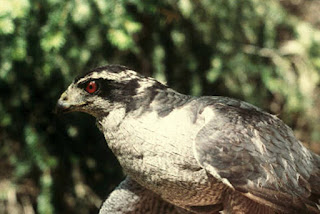 Old Mr. Goshawk found fat pickin’s, literally. At least he did that day. This event, however, seemed to have shocked the dove population back into reality from the state of Nirvana to which they had succumbed. They posted sentries in the tree tops and roofs of nearby houses. I never hear a call of warning, but all of a sudden, whoosh! The whole flock takes off at top speed. Sure enough, the hawk is hot on their tails. The doves have developed a new tactic that seems to be working. While they take off en masse, they scatter to the four winds as soon as they’ve gained altitude. This confuses Mr. Goshawk… by the time he gets around to fixing on a target, they’ve all pretty much disappeared.

I kind of feel sorry for the old bird, though. He spends a ton of energy chasing doves grown fat on easy pickings while he goes hungry. All the birds are gone for now, and I see a furry reddish banner waving above the feeder. Maybe Mr. Hawk should consider hunting squirrels.
Posted by S. Bradley Stoner at 5:30 AM