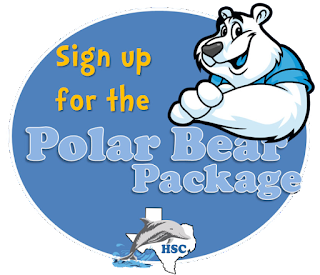 I’m not sure what prompted it. Maybe it was jealousy over all those marathoners running in rainy, 45° weather a couple of weekends ago. Possibly it was the popsicle bike riders last weekend. It could have been that Blue Norther that froze all my foliage or maybe it was just happenstance. I don’t know, but Duncan approached me on my early morning walk.

I must admit I was a bit perplexed. “It’s a little far south for a Polar Bear Club, isn’t it? I mean, it’s not like this is Minnesota or Michigan.”

Duncan snorted. “Did you come outside at all last week?”

Now the fact is that I go outside regularly, regardless of the weather, to indulge in a bad habit. Yep... I smoke. Not much, mind you, but I do. You’re likely to find me out on my back porch rain or shine, calm or windy, hot or cold, not to mention that you’re also likely to find me outside working on one of my many projects no matter what Mother Nature is up to. I just looked at Duncan like, ‘Are you kidding me?’

He got the message. “Okay, I get it. You are from Montana originally, aren’t you?”

I’ll have to admit, I’ve gone a bit soft since I moved to Texas. Thirty degrees here is like a refrigerator and that 28° night actually froze the water in my fountains. Heck, I couldn’t run them for two days. But frankly, cold just doesn’t stick around here in San Antonio, even though folks don coats more suitable for the arctic and do the penguin walk getting from their car to the safety of a temperature controlled environment. I think I even shivered once when I went out in my shirt sleeves, and I haven’t done that since the winter of 1989. Yep... I’m getting soft.

“Sounds like one of Bingo Bob’s ideas,” I returned skeptically.”

Duncan feigned a hurt look. “Well it wasn’t. My nephew, Clyde, came up with it.”

I nodded. I’d met Clyde only once. He seemed like a nice enough young fellow, but to be honest with you, he was kind of low wattage. Clyde lives in the Hill Country about forty miles outside of San Antonio on an old homestead his grandpa left him. He once told me that it had been handed down from his grandpa’s great grandpa, or some such thing. Originally it had been part of a land grant back in 1830... that was before Texas independence... so it’s been in the family for a long time. Clyde is a true Texan and damn proud of it.
“So you’re all going to get together and do what? Jump in Lake Medina or Canyon Lake when it gets cold again?”

“Are you nuts?” Duncan returned. “Have you seen what’s in those lakes? A person could get tangled in the fishing line and tree stumps and drown.”

Now I was really puzzled. All of the Polar Bear Clubs I knew of went out, punched a big hole in the ice of a frozen lake, and jumped in for a brief swim. “So what’s the plan?”

“Look,” he said, “just come over to my place about eight tonight and you’ll see.”

I told him I’d be there; after all, my curiosity was piqued just a tad. We parted company and I headed home.

Time almost got away from me. It does that when you’re retired. Still, about ten of eight, I pulled on my boots, wandered over to Duncan’s, and rang the doorbell. Duncan’s wife answered the door.

She ushered me through to the back door and it suddenly all made sense. I hadn’t been in Duncan’s back yard for over a year. He’d made some improvements since then. For one thing, he now had a huge deck, and on that deck, or rather in it, was a big hot tub. Steam was rolling off it in the cool air. Duncan, Frank, Bob, Clyde, and a couple of guys I didn’t know were all lounging on deck chairs. There was a big cooler filled with ice and beer and a bottle of Jack was on the table. And, yep, there was a big sign hanging off the railing that declared in bold, routed letters, “Texas Polar Bear Club.”

I don’t know if they ever made it into the hot tub. I didn’t stick around that long.
Posted by S. Bradley Stoner at 11:26 AM