The Square Peg - The Shocking News About Texas Worms 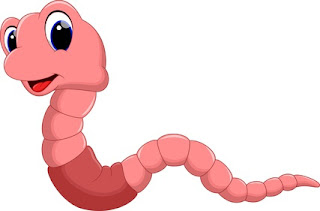 It poured rain yesterday. I’m talking buckets of rain. It filled up my fountains. It made a river of our street. Cars got stuck in underpasses due to high water. It was a mess. Consequently, I had to do my three miles inside the house. I’m kind of worried about that. I’ve had to do my walking inside about six days this past two weeks. I’m afraid I’m going to wear a rut in my carpets. After all, there’s only so many ways to vary a path inside a house, and three miles is a long way when you’re confined. It’s a wonder I didn’t drop over from dizziness. Thank heaven the rain stopped last night. While it was still cloudy, the weather was passable and I didn’t need rubber boots and an umbrella to take my walk today.

Duncan Donutz had a look of consternation on his face as he joined me on my walk this morning. It was easy to spot. Duncan’s emotions read like a book on his face. Obviously something was bothering him. For a while, he walked beside me without saying a word. Didn’t even say, “Hi, how are ya,” like he usually does. Yep... something was bugging old Duncan.

“So, what’s new?” I asked without breaking stride.

“Do you get worms?” he blurted.

“Um, have you been drinking rainwater again?”

“I mean, that’s about the only way you’d get worms,” I rejoined, “unless you’ve been eating poorly cooked pork.”

“Not those kind of worms,” he shot back. “The red, squirmy ones that crawl onto your sidewalks and porch after a big rain.”

“Oh. Sure, everybody gets them. The ground gets so soggy that they’d drown if they stayed there. That’s normal.”

Suddenly I knew where this was going. “Yeah... what’s your point?”

“Anything happen when you did?” His question was a bit tentative.

“Like what?” I actually knew what he meant, but, frankly, I wasn’t going to say it first.

Duncan looked around to make sure nobody else was nearby, then whispered, “Like giving you a shock.”

Let me explain. We have these small, red worms that come out by the thousands... well, that’s probably an exaggeration... a big one. Okay, you get them in the tens. They crawl onto your porch or almost anywhere there isn’t standing water. Then, if you don’t move them, they desiccate and become glued to your pavement... and they leave a brown-black stain that’s only removable with a pressure washer. So, you move them. Only, I use a stick and a piece of flat plastic to pick them up now. Twice picking them up by hand taught me my lesson. My youngest was the first to try that. He reached down, pinched one gently with his thumb and forefinger, then suddenly let it go, jumped back and yelled, “[expletive deleted].”

I gave him a quizzical look. “What?”

“That damn thing shocked me.”

Nonchalantly, I bent over and plucked a worm. It immediately went into crazy gyrations and, sure as I’m typing this, delivered a potent little shock. It wasn’t lethal, but it wasn’t pleasant either. To me, this was a biological conundrum. Earthworms aren’t supposed to do that. I hit the computer and Googled it with every descriptive combination I could think of. I Yahooed it and I Ask Jeeves-ed it. Nothing. Finally, I visited the Texas wildlife site. They didn’t have anything on worms except that they were an acceptable bait in Texas waters. Apparently nobody here wants to admit to electric worms officially. But almost everyone down here knows they exist.

I’m thinking I might be able to do a monograph on them... you know, all scientific and documented and stuff... If only I could get my hands on one without getting bejeesus shocked out of me. But back to the conversation with Duncan.

“I’m pretty sure they don’t discriminate. Seems a lot of folks I’ve talked to have experienced the same thing.”

“How come none of the eggheads know about this? I called the UT and the professor there just sort of laughed at me.”

Actually, I knew it was a futile chase. I’d already talked to their biology department and pretty much got the same response as Duncan did at UT. Yep... I’m thinking if I work it right, I can name the species. I’m thinking something like Lumbricina teslai stonerius... How’s that sound?
Posted by S. Bradley Stoner at 10:31 AM