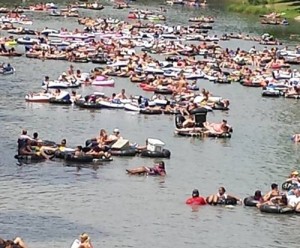 It’s spring… which in Texas sometimes feels like summer everywhere else, especially up north. Whenever I talk to friends up there and the subject of weather comes up, they hang up on me. Maybe it’s the way I giggle. I don’t know. Anyway, I was out in that nice 70 degree weather doing some trimming on my bushes, blissfully unaware of anything else going on, when I hear this enormous KABLAM! I ducked. Any reasonable person would. I barely had time to turn around when this big chunk of thin rubber-like stuff floats down and lands on my Esperanza. ‘Uh-oh,’ I think, ‘is this another Roswell?’ Then I hear Bob. I should have known.

“I told ya to turn it off!” he screams as some phantom in his garage. “Geez, you’d have thought you could see how big it was getting.”

So I wander over to my Esperanza and pluck the odd-shaped piece of rubber from it. In crude letters I see the remnants of writing. “UBE” Of course part of the U and E were missing, but it was still clear. It’s puzzlement. I crossed the street to where Bob was still yelling at the phantom in his garage.

Bob looked up, saw the chunk I was carrying, and grinned sheepishly. “Uh, sorry. That wasn’t supposed to happen.”

I looked and the misshapen pile of rubber in his driveway. It was pretty easy to figure out what had happened. Obviously, Bob had bought a huge inner tube and was blowing it up. Heck, I could still hear the motor on his compressor working to refill the tank. In the shadows, I could see Bob’s wife, pale and shaken, just before she scurried inside.

“Good thing it wasn’t the whole tire on a rim,” I said. “It would’ve killed you.”

It was like Bob didn’t hear me. Well, he was closer to the explosion. About that time Duncan showed up. He was packing. He must have thought terrorists had hit the neighborhood. I mean, how many guys run around with a giant .50 caliber American Eagle on their hip for your ordinary criminal?

“Everybody okay?!” he demanded breathlessly. “That was a helluva bang!”

“Yeah,” I replied, figuring Bob was still too deaf to hear him. “Bob just blew up his inner tube.,, literally blew it up.”

“Holy crap, Bob,” Duncan said, eyeing the huge pile of wrecked tube, “were you planning on taking up the whole river?”

Now, one thing you have to understand is that Bob love’s water… well, he loves it for everything but drinking. I’ve mentioned Bob’s saltwater fishing boat before. I just found out he also owns a bass boat with a ridiculously large outboard to chase those fish down, two jet skis, and an ATV. I didn’t even know he had rented storage for those toys, not that I should. It isn’t any of my business. It just goes to show how much he’s into fun on the water. Something else you need to understand. We’ve been getting rain… a bunch of it that last several months. The lakes are full, the streams are full, and the rivers are full. The Guadalupe and Comal Rivers are close to San Antonio, and this year they are running bank-full.

Now, I recall running rapids in a whitewater canoe in Colorado and Montana. But that’s just not Texas. In Texas we have things like the San Antonio stroll… yep, you can wait in traffic while folks stroll across the street at the crosswalk. Sometimes it takes two lights for them to get to the other side. On rivers, we float… slowly… in inner tubes. You can kill an entire day just lazily floating down the Guadalupe or Comal. If you’re ambitious, you can do both, but you’ll get contemptuous stares from your fellow floaters if they know you’ve done both in a day. Heck, you don’t have enough time to do that… not and drink beer, which is the second greatest pastime of the float crowd. If you want to see beer hats and the variety of configurations they come in, take a float on the Guadalupe.

Anyway, back to Bob and his tube disaster. Turns out, old Bob wanted the biggest, baddest inner tube on the river… he’d even named his behemoth. DER UBER TUBER. Only now, the proud name he’d painted on the side had been shredded. With my piece, it now read, ‘DE UBE TUB.’ Nobody knows where the two missing Rs and E went to… probably the next county, given the amount of air ol’ Bob pumped into that tube.

“Now I gotta go buy another one,” Bob said miserably.

From the house, we heard, “If you do, you’re cooking your own dinner and sleeping on the couch for a month!”

Bob looked up and shook his head. “Damn, I think she means it.”

Duncan looked at me. “Gotta go.”