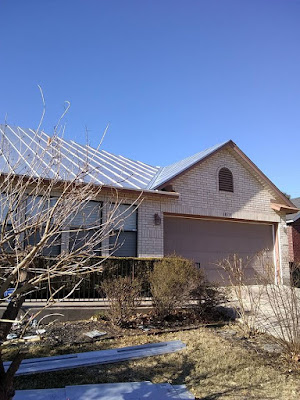 So, up on my roof were six guys stripping off the old shingles. Now, it was pretty obvious what was going on, and most people in the neighborhood are content just to eyeball the process as they take their daily walk. Not Bob. Bob has an irresistible urge to wiggle his way into other folks’ business. I suppose one might consider it annoying, but it does supply me with a lot of fodder for the Peg. Yep, true to form, old Bob spotted me out front checking the progress of the work and took no time at all to scurry across the street.

“You gotta cut back on the beer and barbecue, Bob,” I said during the slight lull.

Bob waved a hand in dismissal and took a deep breath, then blurted, “Puttin’ on a new roof?”

“Nope… getting rid of the old one.”

Bob looked confused. “Yer not gonna leave it like that, are ya?”

“Naw, I’ll caulk it with silicone and varnish it.”

“The HOA won’t allow that!” Bob was apoplectic.

About that time, the roofing foreman showed up towing the metal bender with his 3/4-ton pickup… and, if looks could kill, I’d be dead right now.

“Yer a real smartass, ya know that?”

Like I haven’t heard that before. “It’s kind of my thing, Bob.”

“So, yer goin’ with a metal roof,” Bob said it as a statement, not a question.

“Kinda expensive, isn’t it?”
Bob was obviously fishing for a free estimate from me. Like that was going to happen. I didn’t answer.

“I’ll send my guys over and they can give you an estimate to replace yours.”

I knew that, of course, but like I said, I wasn’t going to tell him what this was costing me. (BTW, it ain’t cheap). On the other hand, it will save me a lot on my power bill, not to mention it increases the value of my house significantly. But I wasn’t going to tell him that either. Sometimes Bob can be a real pest… you know, a house louse, always wanting to suck all the details of whatever you happen to be doing out of you. I’m not what you would call a happy host.

We chatted in Spanish for a brief time, and then he headed off to get the crew organized.

Bob leaned forward and said conspiratorially in hushed tones, “Those aren’t illegals, are they?”

Bob looked at me strangely. “What’s a tay-han-o?”

“They sure don’t talk like Texans,” Bob said skeptically.

“You do realize that Spaniards and Mexicans settled Texas long before Americans came her, don’t you? Now, can you go find someone else to bug for a while? I’ve got things to do.”
Posted by S. Bradley Stoner at 10:33 AM